The Super Game Boy is an adapter for the Super Nintendo released in 1994 that lets you play Game Boy games on a TV using your SNES. Inside the adapter is the complete Game Boy hardware minus the screen and extension port. There's a port on the top to insert Game Boy cartridges. The menu lets the player select a border around the playing field, and what color scheme you want to use for the game. You can even create your own color schemes that can be saved with a password. Like the original Game Boy, the Game Boy Pocket, and the Game Boy Light, the Super Game Boy is not compatible with Game Boy Color-only games.

One downside of the original Super Game Boy, is that it did not have an extension port, most games can only be played by a single player unless the game explicitly supported two players on the Super Game Boy. Another downside with the Super Game Boy compared to the actual Game Boy is that the CPU clock speed is slightly faster (4.295454 MHz which is 2.4% faster, instead of 4.194304 MHz), the reason for that is that it is because the use of the SNES's clock speed is divided by 5, and so the resulting refresh rate is also higher, at around 61.17 Hz instead of 59.73 Hz. Therefore, Game Boy games run slightly faster on a Super Game Boy and games seem to have higher-pitched sounds, although it's barely noticeable. Nintendo later released the Super Game Boy 2 exclusively in Japan on January 30, 1998, which does include an extension port, Game Boy games run the same exact speed as on the original Game Boy, and some better color support for games. 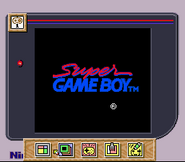 A Super Game Boy original boot-up
Add a photo to this gallery
Retrieved from "https://gameboy.fandom.com/wiki/Super_Game_Boy?oldid=4691"
Community content is available under CC-BY-SA unless otherwise noted.