The Game Boy Light was the second and final revision of the original Game Boy. Released in April 1998, the Japan-exclusive handheld was the first and only Nintendo console to feature an electroluminescent backlit screen until the second version (AGS-101) of the Game Boy Advance SP was released in 2005.

At launch, gold and silver were the only colours, with limited edition models in different colours available later.

The Game Boy Light was succeeded in Japan by the Game Boy Color just half a year later in October 1998. 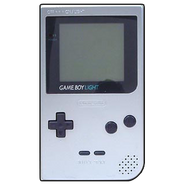