The technical specifications of the original Game Boy Advance are, as provided by Nintendo:

Backward compatibility for Game Boy and Game Boy Color games is provided by an 4/8 MHz Z80 co-processor, while a link port at the top of the unit allows it to be connected to other devices via use of a Nintendo Game Link cable or GameCube cable. When playing Game Boy or Game Boy color games on the Game Boy Advance, the L and R buttons can be used to toggle between a stretched widescreen format (240x144) and the original screen ratio of the Game Boy (160x144).

All the Nintendo handheld systems that have been released since (the SP and Micro versions of the Game Boy Advance, as well as the Nintendo DS, DS Lite, and DSi) have included a built-in light and rechargeable battery. 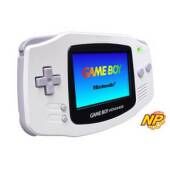 Other accessories for the Game Boy Advance are

Community content is available under CC-BY-SA unless otherwise noted.
Advertisement